Now that I’m embarking on the journey of writing my book, I feel as though it’s important to communicate with those who are close to me. There’s no doubt that my story will be shocking and hard to read for some, specifically – my family. I’ve spent my entire life hiding my depression, so it’s a strange feeling picking up the phone and discussing it openly. I told my dad last week. He’s one of the most caring and light-hearted people I know. He was genuinely surprised and concerned to hear that I suffered from this illness; he had no clue.

It’s interesting… I must have appeared totally normal and functional on the outside, even though I was hurting so badly inside. I became a professional at hiding the pain. I didn’t want my family to worry about me – especially after all that we had been through. So, I just accepted the fact that the pain was a part of me. When things got really bad, I made sure that no one saw my tears. I worked hard to keep it that way.

My sister is really the only person who knew about it, and even she didn’t find out until recently. She finally figured it out, after a horrible night that could have taken my life (which I explain more about in the book). She gave me an ultimatum and dragged me kicking and screaming to a psychologist two years ago, who promptly diagnosed me. I was then sent to a psychiatrist who put me on medication. We told our mom, and that was it. Just my mom and sister knew, and I had every intention of keeping it that way… that is, until I got better and realized that I had finally found the subject matter for my book.

Yesterday, I told my cousin. This was a big conversation, and here’s why:

My family is very close. Growing up, my four cousins were more like my sisters and brothers. My mom was a flight attendant, so my older cousins (Shelly and Chrissy) took care of me and my sister Vanessa when mom was away. Brad was the same age as me. We grew up in the same town, had the same friends and played the same sports. People would joke that we were “the twins” in school. Technically, he was my cousin. In my world, he was my brother. Jeff, our youngest cousin, is a year older than my sister. We were a big, happy family (or so everyone thought)… the popular kids, the athletes.

On July 20, 1998, Brad committed suicide. He shot himself while sitting in his jeep by the lake we grew up on. He was 20 years old. The police found a nine page suicide letter on the passenger’s seat. One of those pages was written to me.

I know that there have been many unanswered questions over the years, and there are still open wounds – 11 years after the fact. It will always be that way. His death changed us, and we will never fully recover from it.

So, when I called Chrissy yesterday, I talking a mile a minute. I told her everything. We spent a long time on the phone… We spoke about Brad a little, but we mostly talked about my book and ways that I plan to get more involved with depression awareness and suicide prevention programs. She asked me two important questions. 1) Do I think my fate would have been different if I hadn’t seen first-hand how Brad’s death affected our family? and 2) Am I ready and prepared to do this (in reference to writing the book)?

The answer to question one will be its own chapter in the book. And the answer to question two is a no-brainer. Yes, I’m ready and yes, I’m prepared. If I hadn’t found the light, then I would still be hiding. But I have found peace within myself now, and I know that my purpose is to help other people who suffer. 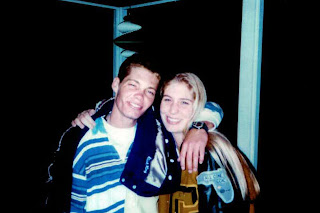 Gratitude is My Attitude